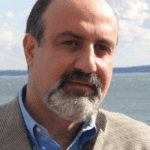 Nassim Nicholas Taleb spent more than 20 years as a derivatives trader before starting a full-time career in research in the field of risk management and applied probability.
Taleb has been involved in risk-based policy making, advising the IMF, and the UK Prime Minister on model error and the detection and mitigation of tail exposures. He has also been hired the RAND corporation and various branches of the U.S. government and has testified twice for the United States Congress.
Taleb holds a PhD from the University of Paris and an MBA from the Wharton School. He is the author of the Incerto, a 4-volume essay on uncertainty (Antifragile, The Black Swan, Fooled by Randomness, The Bed of Procrustes), and Dynamic Hedging (1997), a technical clinical book on derivatives, in addition to Silent Risk, a freely available technical book (and reexpression of the Incerto) in applied probability theory. 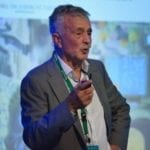 Dr. Spyros Makridakis is a Professor at the University of Nicosia, where is also a director of its Institute For the Future (IFF) and the founder of the Makridakis Open Forecasting Center (MOFC). He is also an Emeritus Professor at INSEAD and the University of Piraeus. He has authored, or co-authored, twenty-four books and more than 270 articles. His book Forecasting Methods for Management, 5th ed. (Wiley) has been translated in twelve languages and sold more than 120,000 copies while his book Forecasting: Methods and Applications, 3rd ed. (Wiley) has been a widely used textbook in the forecasting field with more than 5300 citations.

Professor Makridakis was the founding editor-in-chief of the Journal of Forecasting and the International Journal of Forecasting and is the organizer of the M (Makridakis) Competitions. His article “Statistical and Machine Learning Forecasting Methods: Concerns and ways forwards” has been viewed/downloaded more than 123,000 times in PLOS ONE where it was published in March 2018 while his paper “The forthcoming Artificial Intelligence (AI) revolution: Its impact on society and firms” (Futures, March 2017) is the most downloaded one of the journal. He is mentioned in Wikipedia in https://en.wikipedia.org/wiki/Spyros_Makridakis and https://en.wikipedia.org/wiki/Makridakis_Competitions